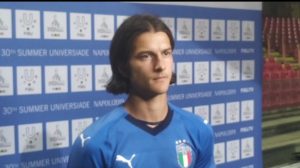 Italy vs. Japan: the Italian team keeps the audience of Arechi Stadium hanging. After the cheers for the score of 3-3 at the 50′ mark against the opposing team, the breath-taking match ends with a score of 4-5 for Japan, taking home the qualification to the finals after winning at the penalty kicks. Italy, excluded from the finals, will play for the last time in this Universiade, to conquer the bronze medal, against Russia, on Saturday, July 13th, once again at Arechi Stadium. Brazil and Japan, instead, will compete for the gold medal.

Congratulations for the match, despite the defeat; the tactical position of the Japanese team caused you many difficulties even if you have been able to open the match quite soon.

“Yes, of course, they have been training long for this event. The day before, they were the odds-on favourites and they proved it. On our side, we did our best, honouring the Italian team all the way, and the audience aknowledged that. In any case, we need to recover our energies now, especially mentally, in order to face the Russian team at the best of our possibilities and win the bronze medal, which we surely deserve.”

What did you feel playing on this football field where your father wrote many important pages for the supporters of the Salernitana team?

“A great emotion, I often watch his videos, which he jealously treasures, and it would be a dream for me to follow in his footsteps in the future.”

ARGENTINIAN DEFEAT, CARDOZO: NAPOLI2019 HAS BEEN A POSITIVE EXPERIENCE IN THE CITY OF DIEGO

Defeat and last place for Argentina at Napoli 2019 Universiade. South Africa wins on penalties, after having caught up caught up with the...

Irish Head Coach Dave Connoll weighs in on the team's defeat against North Korea Do you think you could have done something different...

Interview with Chloe Mustaki,  Captain of Ireland women's football team after the match against RPD Korea You have done well...